I started this new year off with a shoulder injury from sledding with my kids yesterday. The doctor suspects it is a torn rotator cuff, but we won't know until I get in for an MRI. Right now, I'm just taking it easy and adjusting to the fact that I can't move my right shoulder too much. It is definitely going to make working more interesting.

My motivation for coding comes and goes. Over the past week or so, I'd say I've been very motivated. About a week ago, I started re-organizing my digital magazine library of old 80's computer magazines. I imported them all into Calibre and spent hours cleaning up the metadata and assigning issue numbers and publications dates to them all. I then realized that the original PDFs aren't affected. Calibre is "okay". It doesn't do very much to be honest. Or at least, it doesn't do enough. It should have built-in readers, but it doesn't. It should be able to pull metadata from various services, but it doesn't. It relies on the file name and file metadata for its information. It sucks.

Anyway, so earlier last week I ended up creating "Mass File Renamer" using JavaFX. I know there are tons of these applications out there already, but I can never remember which ones I use, and I also felt like trying to make my own. The end result is pretty nice. I'm very happy with the result. I wanted to adjust the naming convention of my files to put the series information first (i.e. "Ahoy! [21] - Ahoy" instead of "Ahoy! - Issue #21") as I think Calibre would be able to understand that format better.

After that quick success, I wanted to do something bigger. So I started an application that renders all PDF metadata (basic, xmp, javascript, embedded files and forms, etc) and in some cases allows you to modify this information. I call it "PDF Sponge". It isn't quite ready yet as I am struggling with how to represent some data, specifically the JavaScript code since it can be littered all through out a PDF. I do hope to have something done in the next couple of weeks. 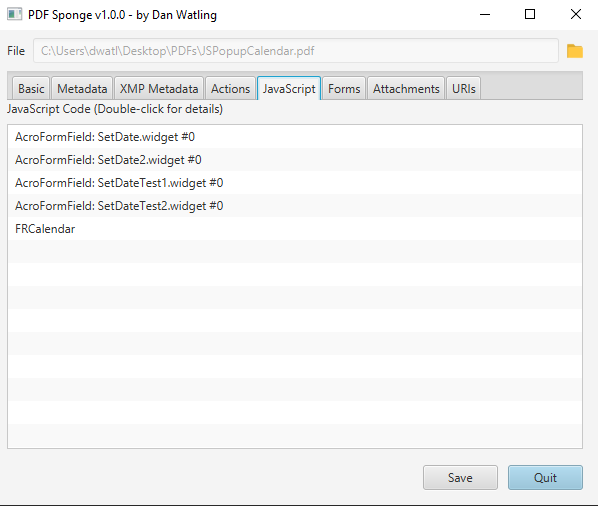